When will You Retire

For the many of us the idea of owning our own business, and retiring early is a desire that burns deep within. Not saying that everyone one doesn’t want to retire early, but some of us are not built to work the 9-5 job where we move around like sheep doing the work while someone else enjoys the benefits. With some people there is a little voice that screams deep inside to let him out. He screams he can’t take it anymore, and there has to be more to life. Unfortunately, most of us never let that little voice escape the hidden places of our mind. We toil in agony, working countless hours in a job we hate, hoping to earn enough money to retire someday.

The longer we work we begin to realize that retirement seems so far off. It’s like they have a built systems around us that makes it harder and harder to retire every year. It use to be people retired around 45-55, but now people are working into there 60’s trying to make just enough so they can relax someday instead of working themselves to death. And, if things have gotten that bad now, imagine what it’s going to be like when we are older. Do you think that you make enough money to be able to save for retirement? Think of all the bills you have and responsibilities you are taking care of. How much money do you honestly have saved? A few thousand, maybe. The fact is there are only two ways to retire in today’s world.

#1: We start cutting back now!
That’s right. We stop enjoying life, and we start cutting the amount of bills we have so that we can save every dime we have. By doing this you will have to move out of the place you live in now, and move into a little bit less reputable neighborhood. You know, the kinds where drugs are being sold on the corner, and the crackle and pop you hear every night is not the sound of fireworks but rather guns being unloaded. Sure you might have to dodge the occasional bullet or 2, and you will more than likely have to pull your son or daughter out of a random gang initiation later on in life, but think of the money you will be able to save. With all that money being saved you will probably be able to retire around 60 and live out your remaining 10 plus years in peace. There are a lot of different variations to cutting back, some more severe then others, but lets face it unless you are used to living in the slums of India you probably would like to shy away from this concept if you could.

#2: Start working for yourself!
You heard it folks. The fastest way to achieving retirement and living the life you want to live now is to work for yourself. Owning your own business allows you to have the freedom you deserve while giving you the opportunity to earn more money than you ever would working for someone else. However, our world has changed a lot in the last 20 years and with it is a ever changing business structure. The days of Mom and Pop store have all but vanished. Starting a business by opening a corner store and growing from there is an almost certain disaster. Not only will you suck up all your time and money keeping the store afloat, but you will never be able to retire. We are in a one stop shop world, and if you can’t supply a little bit of everything then you will probably be run out of business. So how can we use this build a business model that can not only bring in the income we deserve, but give us the freedom to enjoy it. The internet.

The world wide web is a wonderful tool that can be used to attract and funnel millions of people who surf it everyday. Did you know that over 100,000 people search the internet every week hoping to find the right way to start a business online? With that in mind there is really no argument on where you should start this wonderful business opportunity. The only question that remains is how and what you will sell with it?

During the California gold rush thousands of people moved out west in search of finding riches, but only a few succeeded. They found it hard to find small fragments of gold in all that dirt, but the ones that did made some money. However, do you know that the ones who became millionaires weren’t the ones digging for gold, but rather the ones selling the shovels. So ask yourself, are you going to be one of the millions digging for gold or do you want to start selling the tools to help them find it? 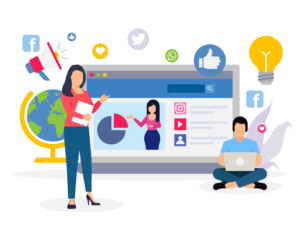 Personal Branding – Thinking of how to start your own brand?

Any thing can be a brand : whether an individual or a company or a product. Thinking of how to start your own brand? These questions

Personal Branding in the year 2022 : Need of the Hour

If the title caught your eye, we are pretty sure you have been curious about it or are trying real hard to kill some lockdowntime. Either If you are brand new to the world of SEO, this is a must read article for you! SEO- Search Engine Optimization is one of the

Data-Driven Creativity- The Tomorrow of Branding

Imagine yourself scrolling through your social media “digi-shopping” for the heck of it. After a few minutes, ads pertaining to the product follow you as To Spend Or Not To Spend

If you are relatively new to the field of digital marketing, you would have probably come across dozens of people who say they can fetch you

We are brand marketing experts equipped with deep knowledge of data analytics to clear the red ocean for you and convert leads for your business.